How to start a post saying that I finally tasted the Château Pétrus?
Let me start explaining a little bit about the history of this wine and how it became a myth.
Native from the Pomerol, Bordeaux French region, this wine is not classified as a “Grand Crus”
But, how is this wine so famous, valued and expensive?
The first time that it became famous where in 1878, when it won the Gold medal at the International Competition in Paris. After, had a notorious year in 1945 and 1947. But, it really won their current famous and status in the 60s, when it arrived in New York city at the “Le Pavillon” restaurant and was tasted by the Greek magnate, Aristoteles Onassis. Just after this day, Pétrus wine became a symbol of status.

Just to have an idea, all production of this wine is sold in “primeur”, it means, investors and collectors buy this wine in the same year that it is produced and leave it to mature at the winemaker until it is ready to get more commercial cost. Here in Brazil, I found this wine between 7k to 20k R$ per bottle. Based on the price, we can compare it with the Borgonha Romanée-Conti.

Sure, no doubts that Pétrus is one of the most expensive wine around the world, but is it the best one?
How is made this jewel?
The secret is the vineyard that is around 11 hectares of clay and calcareous soil, where there are just Merlot grapes, the winemaking process is practically unchanged since the 19th century. Are used vines that is 45 years old and they are renewed when they are 70 years old. In general they spend 22 to 28 months in new oak casks and depending of the vintage they can increase 5% of Cabernet Franc grape. In average they produce 30,000 bottles per year.
For example the 1997 vintage had a small production comparing with other years, but, in compensation this vintage is a more robust wine with more alcohol degree 13,5%

Well, now it’s time! But, first of all let me explain how I had this opportunity. An enthusiastic wine taster had this bottle and invited six friends to tast it. We started tasting with a Drappier Rose Champagne that I brought to the group, I really enjoyed this Champagne. After some time in the decanter, we tasted the myth!

This vintage got these notes at these years:

And, what is my opinion?

Well I tasted this wine for 2 consecutive days and didn’t change. I read on some sites that is good to open this vintage between 2006 and 2025. If for a miracle I have two bottles, I would open one in 2015 and other in 2020, at maximum. This wine have a good structure, but I can say that it’s not going to support too much time, unless you prefer to appreciate more “Mature” wines. I really prefer wines at its peak, but, I really don’t know if this wine will find a peak. I think this wine, in this vintage, is what is it!

Summarizing, is a well done wine, I can say perfect. Tannins, softness, all at the perfect balance.
Unfortunately it didn’t have the extra that I was expecting. This year I tasted another famous wine that excited me more.

When you taste a wine like this, you expect to reach your heart, which can do a connection between the wine and you, a passion that can turn into love in a few minutes.

Finally, I can say that I tasted the myth, a Pétrus! 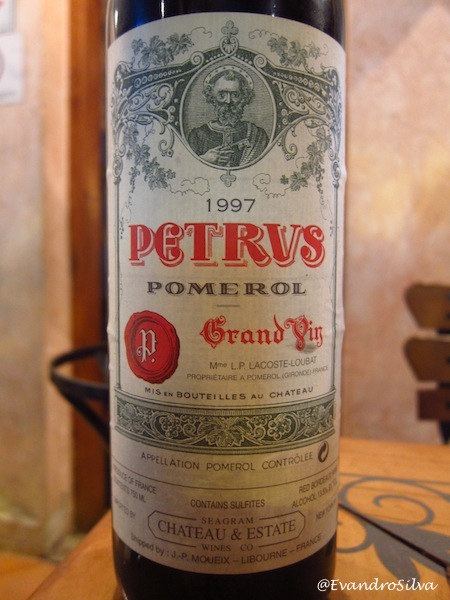